One of my favorite things that I do every year is watch some of the classic Christmas movies from the 40’s and 50’s that my Mom watched every Christmas!  Of course, when I was young, I really didn’t pay much attention to these movies.  But, now I watch them every year just like she did! 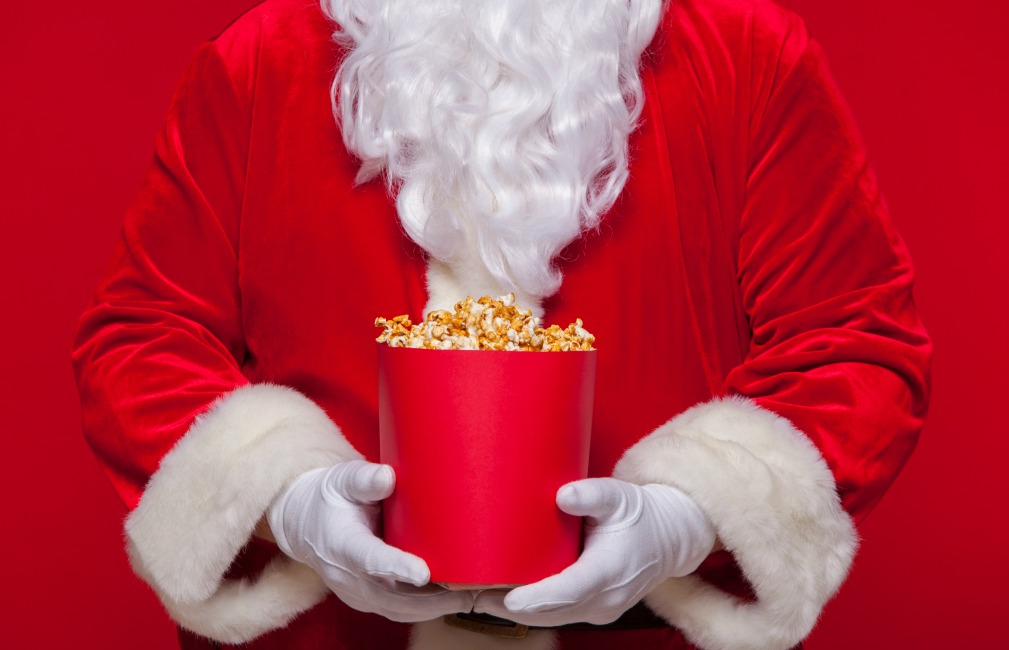 The movies I’m going to share with you today are ones that I try to watch each year!   I’m not including the movies you will see over and over like White Christmas, Miracle on 34th Street, or It’s a Wonderful Life.   But, the movies I’m sharing don’t get played on repeat each season, and that is what makes them even more special!  The movies are all airing on TCM, and I include the dates and times for each one.   At the end of this post, there is a printable schedule if you want to put it on your fridge to remind you!    And, I’ve also included links to each title to purchase or watch on Amazon.  I hope you enjoy these more obscure classics as much as I do!  So, here are my favorite classic Christmas movies and when you can catch them on TV this season!

the man who came to dinner

From 1942, this is one that I try to catch every year!  When acerbic critic Sheridan Whiteside slips on the front steps of a provincial Ohio businessman’s home and breaks his hip, he and his entourage take over the house indefinitely.  It’s not your typical Christmas movie for sure, but is quirky and full of fun!  Stars Bette Davis, Ann Sheridan, Monty Wooley, and Jimmy Durante.  Airs on TCM:  Saturday, December 12 at 5:45 p.m. EST and Wednesday, December 23 at 11:45 p.m. EST and Friday, December 25 at 2 p.m. EST

it happened on 5th avenue

This is another quirky Christmas movie from 1947!  A homeless New Yorker moves into a mansion and along the way he gathers friends to live in the house with him. Before he knows it, he is living with the actual home owners.  Airs on TCM:  Sunday, December 20 at 8 p.m. EST and Thursday, December 24 at 11:45 a.m. EST

IN THE good old summertime

This classic movie is from 1949!  It’s basically a musical version of the Christmas Classic, The Shop Around the Corner.  Starring Judy Garland and Van Johnson.  If you like musicals, you’ll love this one!  In turn-of-the century America, Andrew and Veronica are co-workers in a music shop who dislike one another during working hours but unwillingly carry on an anonymous romance through the mail.  Airs on TCM:  Sunday, December 13 at 6 p.m. EST  and Tuesday, December 22 at 10 p.m. EST and Thursday, December 24 at 2 p.m. EST

This is a great holiday classic filmed in 1945 and stars Barbara Stanwyck as a “1945 Martha Stewart” who has a magazine column titled “The Diary of a Housewife”.  The only problem, it’s all made up.  But, she must provide an authentic family holiday for a war hero to save her job!  Airs on TCM:  Tuesday, December 22 at 8 p.m. EST and Thursday, December 24 at 6 p.m. EST

the shop around the corner

If you’ve seen the movie, You’ve Got Mail, this is the 1940 original!   It stars Jimmy Stewart and Margaret Sullivan. Two employees at a gift shop can barely stand each other, without realising that they are falling in love through the post as each other’s anonymous pen pal.  Airs on TCM:  Sunday, December 20 at 4 p.m. EST and Thursday, December 24 at 10 p.m. EST

This 1949 romantic comedy stars Robert Mitchum and Janet Leigh.  A young widow is romanced by a sales clerk whom she inadvertently got fired.  Airs on TCM:  Wednesday, December 23 at 12 a.m. EST and Friday, December 25 at 4 p.m. EST

From 1940, this classic Christmas movie stars a young Barbara Stanwyck and Fred MacMurray.  A shoplifter and her prosecutor fall in love, creating tensions for his career and family.  Airs on TCM:  Friday, December 18 at 8 p.m. EST

Another great Christmas classic movie that features Bing Crosby as Father O’Malley, a young priest at a financially failing church in a rough neighborhood.  Going My Way was the highest grossing picture in 1944 and won the Academy Award for Best Picture.    Airs on TCM:  Sunday, December 20 at 5:45 p.m. EST

the bells of st. mary’s

This is the sequel to Going My Way and was filmed the following year in 1945.  It stars Bing Crosby, returning as Father O’Malley, and Ingrid Bergman as Sister Benedict.  At a big city Catholic school, Father O’Malley and Sister Benedict indulge in friendly rivalry, and succeed in extending the school through the gift of a building.   Not aired this year

This is one of the “newer” in my list of classic Christmas movies from 1956 and stars Debbie Reynolds and Eddie Fisher. After finding a baby outside an orphanage, a salesgirl receives sympathy from those around her, including her boss’ son, as they all assume the baby is hers.  Airs on TCM:  Sunday, December 13 at 2 p.m. EST and Wednesday, December 23 at 4:30 a.m. EST

In this 1947 Christmas classic, Cary Grant plays a handsome angel sent to earth to help a bishop repair his fractured marriage!  It also stars Loretta Young and David Niven.  Airs on TCM:  Saturday, December 19 at 6 p.m. EST and Thursday, December 24 at 8 p.m. EST

meet me in st. louis

COME TO THE STABLE

This 1949 classic is about two French nuns (Loretta Young and Celeste Holm) who come to the New England town of Bethlehem and set up a children’s hospital.   Airs on TCM:  Monday, December 21 at 8 p.m. and Tuesday, December 22 at 12:45 p.m.

the miracle of the bells

This classic stars Fred McMurray and Frank Sinatra and was made in 1949.  The storyline is unique and revolves around a small Pennsylvania town that comes together to mourn the passing of a young actress before her first film premieres.  Airs on TCM:  Monday, December 21 at 9:45 p.m.

Feel free to print the schedule below!  And, note that, like shown above; all of these listings are in Eastern Standard Time.  You can check your local TCM listing showtimes HERE. 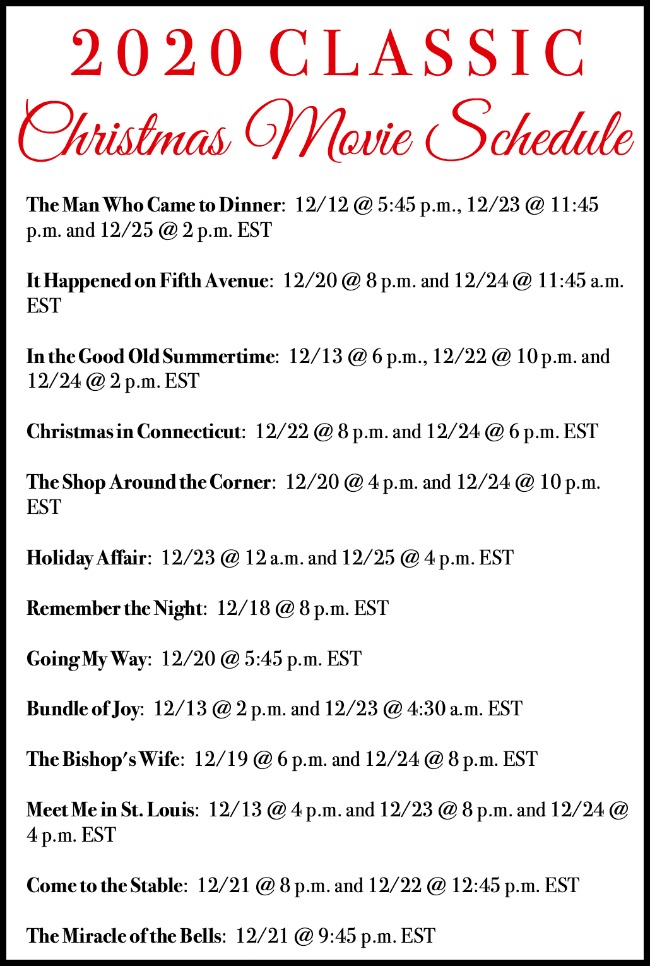 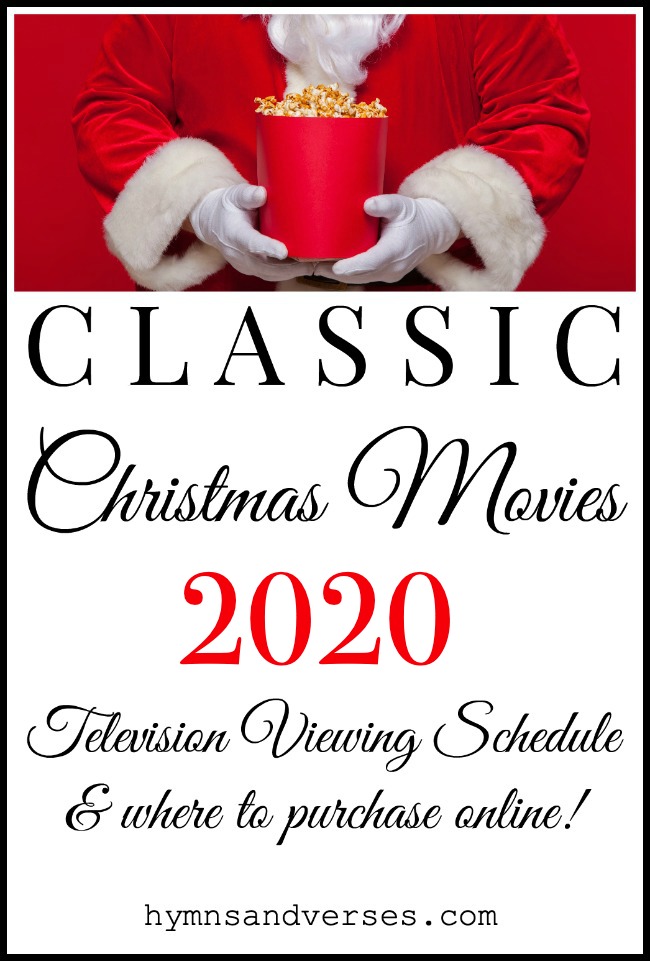