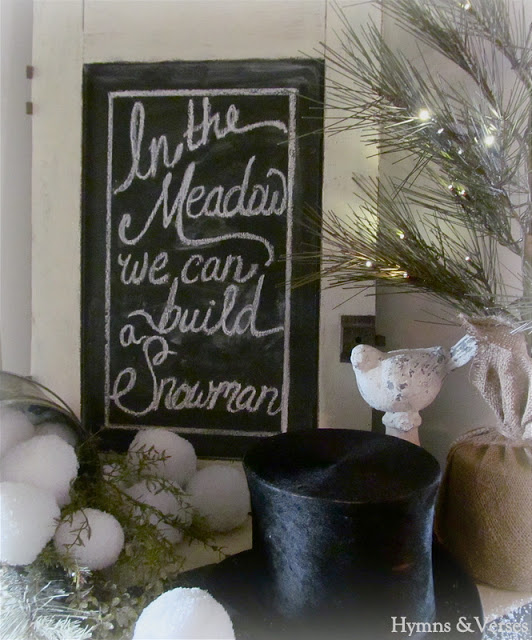 I was rearranging things the other day for Christmas decorating and moved my stack of vintage hat boxes to the upstairs hallway.  But, they aren’t just hat boxes, they have the original hats in them from my grandfather and date back at least to the early 1900’s.   I don’t know if I had just heard a snowman song on the radio or I read a blog about snowmen, but when I  moved those hat boxes, my first thought was “wouldn’t it be great to make a snowman vignette with my grandfather’s top hat?” 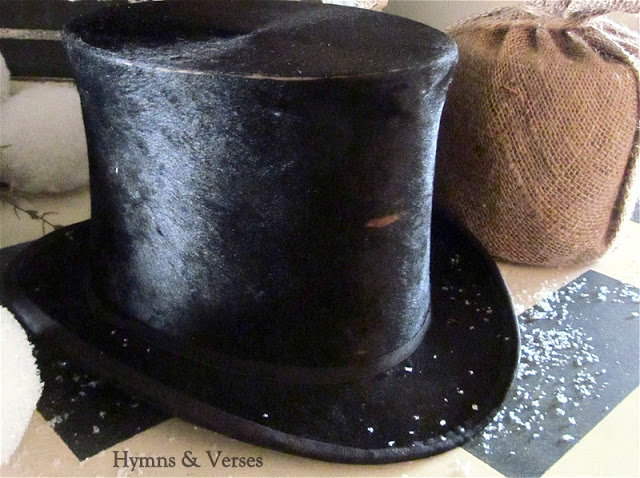 My first thought was to update my cupboard door chalkboard with “In the Meadow We Can Build a Snowman”.

I wanted to add some kind of snow or snowballs.  I have read all the great tutorials lately on Epsom Salt snowballs and even got some to try, but didn’t end up using it this time.  I ended up with a bag of cotton batting balls (like the batting you use to make a quilt – not a baseball!).  They were in the clearance section at Michael’s and were 1.99 for 12.  I decided that they would work great to make snowballs.

Here’s how I made 12 snowballs out of the batting balls.  First, the balls were small, but as with any kind of fabric batting, if you pull on it, it loosens up.  I just tugged on each side equally until I had the size ball I wanted.  I actually kept a few the smaller size too.

Then I jabbed the pointed end of a wooden skewer into the batting ball, sprayed it with spray adhesive, and swirled it around first in a bowl of Extra Fine Buffalo Snow that I already had on hand and then in Diamond Dust glitter.

I think they turned out pretty good and were far less expensive than Styrofoam to make snowballs (on that note, didn’t you used to be able to buy a Styrofoam ball for like $1???)