I’ve been so looking forward to sharing this post with you!  It all revolves around a baby shower, a canopy crib, and how it was transformed into a cozy daybed for future grandchildren! 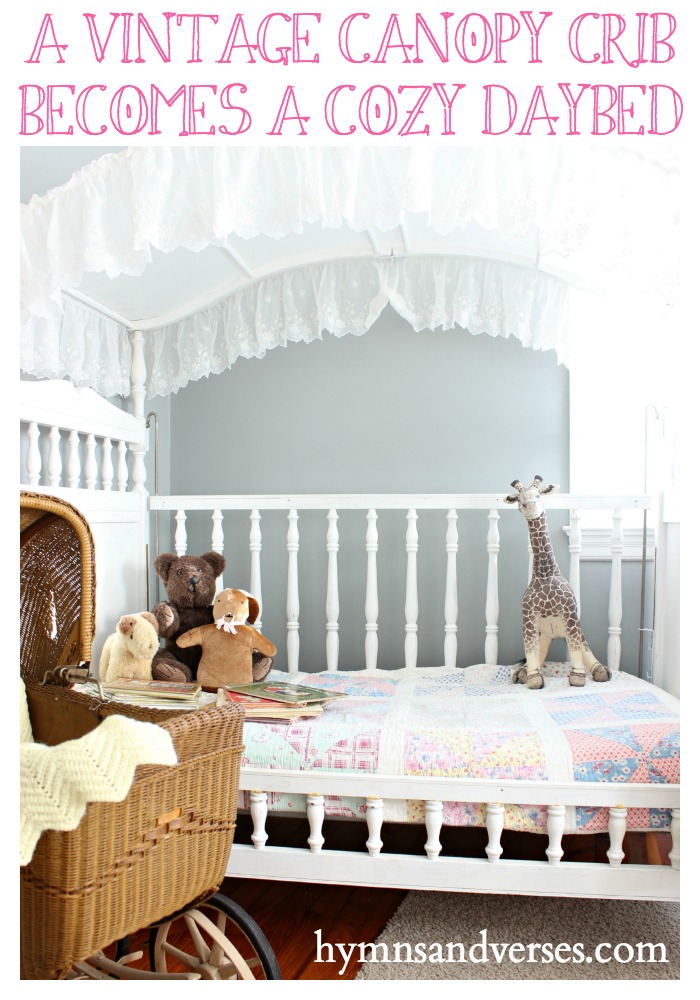 On Sunday, I shared a mason jar gift for the new mom and told you about my friend, Cindy and her daughter, Kelsey – who is expecting her first baby any day now!  Cindy and I are the best of friends!  We met when we were both pregnant with our third child, both boys, and discovered that each of our two older children were also the same age.  We became fast friends and did so many fun things with our combined six kids growing up – so many wonderful memories!  Now our children are all grown up!  There have been three marriages, and now,  a new milestone – the first grand baby! 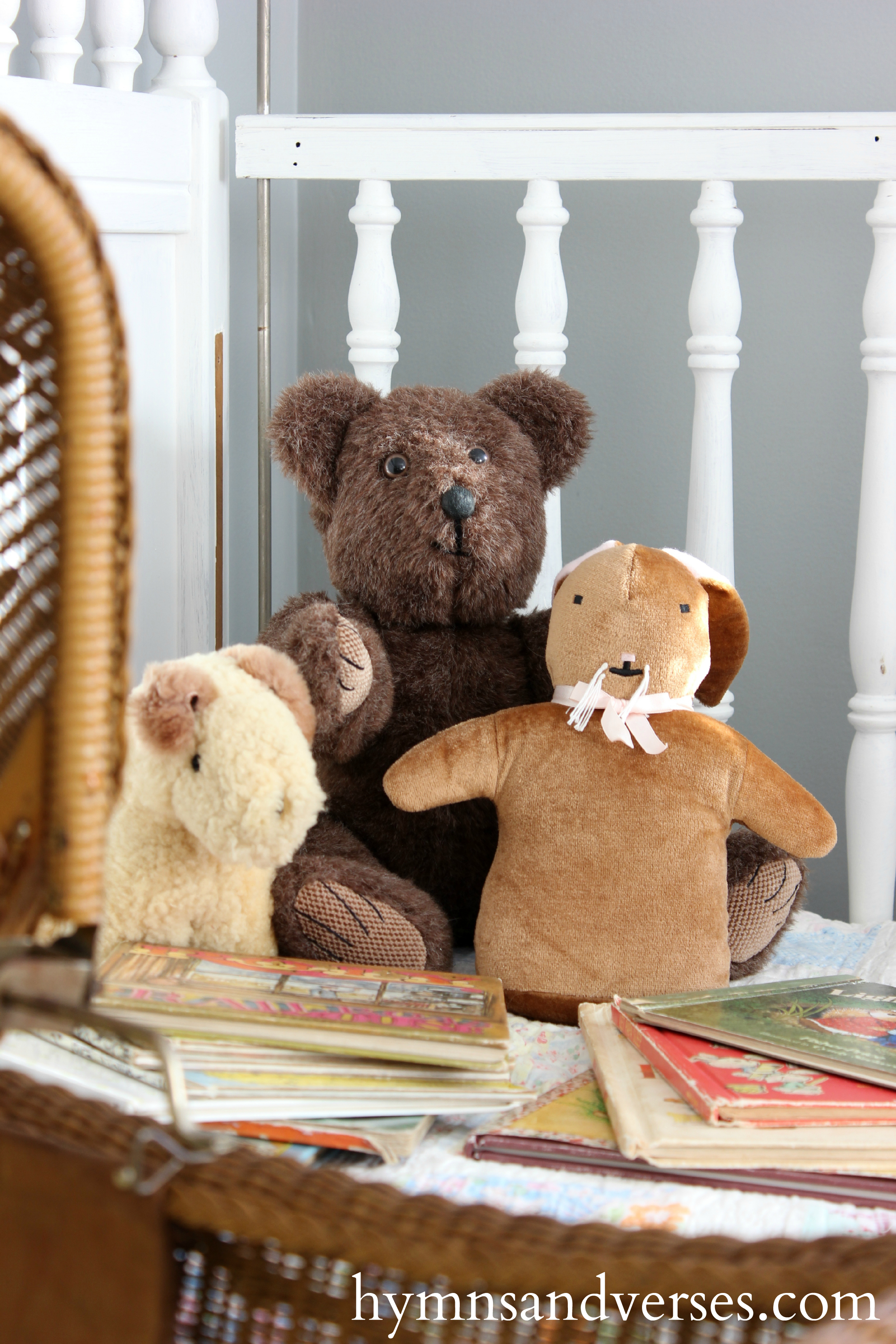 One day, Cindy told me that her mother-in-law  had the crib that her husband and his brothers had slept in as babies.  It was a canopy crib – sigh!  You don’t see too many canopy cribs today!   I immediately thought it would be an amazing display piece at the shower to hold all the gifts!   Time passed and then one day I was at Cindy’s house to make applesauce and she said “guess what  –  my mother-in-law threw out the canopy crib”.  I’m like  – “WHAAAAT?  –  WHYYYYYYY???”   Cindy explained that because the crib didn’t meet safety guidelines for cribs today, her mother-in-law didn’t think it would be of any use!  In her defense, she didn’t know our plans for the crib.

So, we stood there in Cindy’s kitchen, with apples cooking on the stove, and I said  “when did she throw it out and where?”.   Cindy said she had just spoken to her  the night before and her mother-in-law said her husband put the crib in the dumpster at the family business.  So,  I said – “let’s go dumpster diving!”.   After a few phone calls, we found out that the trash had not been picked up yet, so we took the apples off the stove and jumped in the car to rescue the canopy crib!

When we got to the dumpster, we were so excited to see, what we thought, was the entire crib.  We pulled out the frame pieces,  the mattress, and the springs.  As we were loading it into the SUV, we discovered a missing piece of hardware – Ugh!!!  So, we went back to the dumpster and a shine caught my eye – way at the back end of the dumpster!  The missing piece!  This was a HUGE dumpster and we looked at each other thinking “how are we going to even get up high enough to get into (yuck) the dumpster to get the missing piece!  Then, Cindy says “Wait – I’ve got a step stool in my car!”  Who carries a step stool in their car???  I won’t get into all the details, but indeed she did have a step stool in her car and she climbed up and into the dumpster and grabbed that shiny piece from the back!   It was at that moment that I said – “you know, a good blogger would be sharing this on Instagram, Facebook, Periscope, or at the very least; taking action shots to share later in a blog post”.  But at this point, I felt like it would be weird to stage shots, so we hopped into the car so happy that we saved the crib!  Then, Cindy called her mother-in-law to see if she had the pretty canopy fabric and we were so excited when she said, yes – it was in their trash at home!  So, we drove to her house and got that!  Cindy’s mother-in-law got such a laugh over our crib rescue!  Then, she asked if we had gotten the bag of hardware for the crib that had also been thrown into the dumpster?  Our hearts sank, because that meant we had to go back to the dumpster!  But, we were undaunted!  We got back to the dumpster and Cindy’s father-in-law just happened to pull up behind us!  He also had a chuckle  when he saw the crib pieces in Cindy’s SUV!  We asked him about the bag of hardware and guess what – he had given it, along with some other pieces of the crib (that we didn’t know we were missing) to a handyman friend!  Ugh!  But, he told us to follow him to his friend’s house and he would get it all back for us!  At this point, we’re both like – this is too crazy!  But, after one more stop, we had everything  needed to put the crib back together again!

On the drive back to Cindy’s house, we decided that the crib needed a little paint makeover – there was nothing wrong with the wood finish, but we both thought a fresh coat of white paint would make it look fresh and updated.  So, we spent a few days in Cindy’s garage painting the canopy crib with white chalk paint!  But then came Cindy’s genius idea to transform the crib into a day bed!  It would be a special little cozy spot at her house for when the grandchildren come to visit!  Cindy’s husband (and future granddad), Trent, worked some DIY magic and cut down the one side rail and attached it to the bottom front of the crib. And – wa laaaa – a gorgeous canopy daybed! 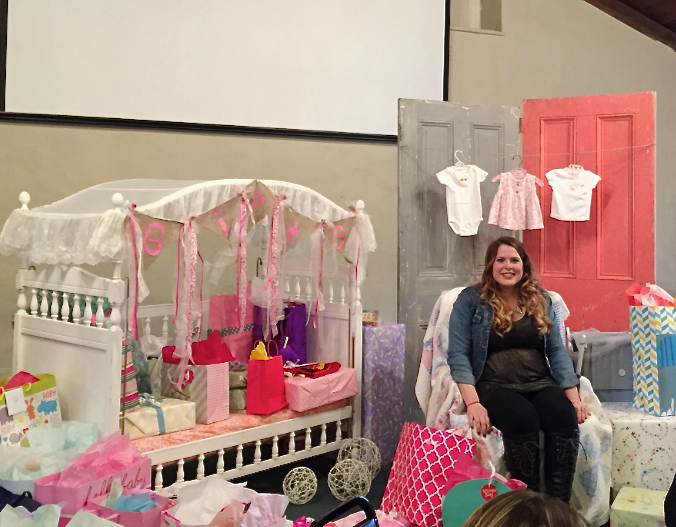 It WAS the perfect display piece at the baby shower and now it’s all set up at Cindy’s house in a special room for her grands!   A little piece of the past for grand babies to be read to, take naps in, and dream sweet dreams!