Do you watch The Great British Baking Show?  If not, you don’t know what you are missing!!!  My friend, Cindy turned me on to this show several years ago!  Originally it was shown here in America on PBS, but now you can watch the series on Netflix.  Here is the concept of the show, in a nutshell: 12 contestants meet in a large outdoor tent/kitchen and complete 3 baking challenges each episode.  The winner of the week’s challenges is declared “star baker” for that week!  And, each week, someone is sent home.   There are some amazing bakers and some fun personalities on this show each season!  My twenty-something son and wife loves it!   Plus, the setting is in the glorious English countryside and is just gorgeous! 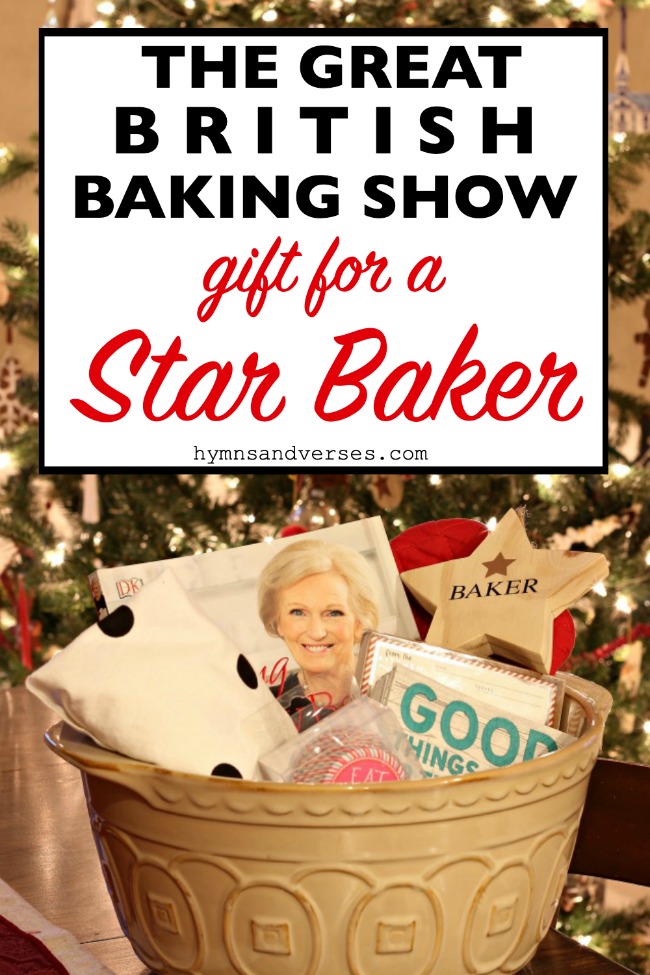 A few years ago I decided to give Cindy a themed gift based on The Great British Baking Show.  Cindy is quite a baker herself, so this gift was appropriate for her and was such a fun one to put together!  I’ve wanted to share this idea here ever since!   My idea for this gift came when I saw THIS mixing bowl that is a staple for each of the bakers on The Great British Baking Show.  I found it at HomeGoods!  I wasn’t able to find this exact bowl, but you can purchase Mason Cash mixing bowls at World Market, Macy’s, and Amazon.  These mixing bowls are make in the UK and have quite a rich history.  The one I got Cindy is the large size.   Then, I filled the bowl with some things for the baker.

The  main “ingredient” included in the mixing bowl was a cookbook, of course!   The first several seasons of the show featured Mary Berry as one of the two judges.  Mary has several cookbooks, but I purchased THIS ONE for Cindy.  Below are some other cookbook choices that would work great!   Paul Hollywood, the other judge on the show, has a bread cookbook and I’m sure it’s very good!

The next “ingredient” in Cindy’s mixing bowl was kitchen apron.  You can purchase some beautiful kitchen aprons at HomeGoods, TJ Maxx, Marshall’s, or even Target.  Here are a few that caught my eye on Amazon!

The rest of the “ingredients” in the mixing bowl were little things – an oven mitt, some fun cupcake liners, napkins that read ”  good things come to those who bake”, recipe cards, etc.    Here are some other ideas:  kitchen towels, measuring cups and spoons, wooden spoon and utensils, parchment paper, rolling pin, etc.  You can fill the bowl as full as you like!  You can find all of these things readily right now at your local HomeGoods and sister stores, Target, Walmart, etc.

The final “ingredient” was a “star baker” ornament that I made for my sweet friend who loves to bake!   I picked up a simple wood star at the craft store and applied a GOLD star stick and the word “BAKER”.

I hope you enjoyed this little gift idea!  And, if you’ve never watched The Great British Baking Show or “Bake Off”, you have to check it out on Netflix!  My recommendation would be to begin with Season One and move forward!  Even if you aren’t a baker,  I promise, you’ll be hooked!!!